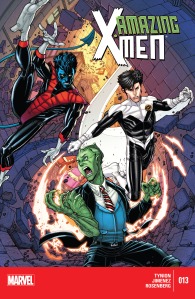 It’s time for a heartwarming one shot in Amazing X-Men, especially since the mutants just saved Canada by battling my least favorite comic book monster – the Wendigo. These issues heavily featured Northstar, who is one of the very first openly gay comic book superheros (ever!).

Northstar joins the faculty of the Jean Grey School for Higher Learning and is supervised by Nightcrawler who doesn’t quite agree with his methods. I mean, a class about spa treatments couldn’t hurt a bunch of stressed-out teens, right?

Nightcrawler also points out that Northstar has lost track of one his students named Vic, or Anole. Vic’s mutation is that he looks like and has the powers of a lizard. He basically looks like a Gorn from the original Star Trek show. 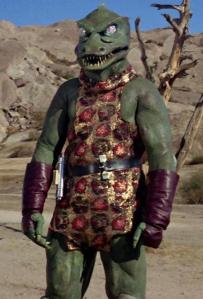 Vic runs off to the city to meet up with a guy he has been romantically chatting with for the first time. The guy has never seen him in this lizard form before. Vic ends up standing the guy up because he loses his nerve because he’s afraid of being rejected. Talk about the ultimate catfish!

Northstar and Nightcrawler run off to New York to bring Vic back to school, but the three of them have a run in with Martinique Wyngarde, a bad-girl psychic who gives people illusions of their deepest insecurities. Nightcrawler thinks he’s a boy back in the circus, Northstar thinks everyone’s ignoring him, and Vic gets repeatedly rejected from the guy he likes.

Nightcrawler gets the best of Martinique in the end. Vic tells the two teachers how rejected he feels by everyone, not only because he’s gay, but also because of his lizard skin. Northstar tries to appeal to him, but it’s ultimately Nightcrawler who breaks through. Kurt reminds Vic that if he feels insecure about how he looks, he needs to learn how to have a charming personality to make up for it.

In the end, Vic does meet up with his friend, who by the way doesn’t reject him, and finds his Gorn look pretty cool.

All jokes aside, this issue reminded me of why I’m such a fangirl of the X-Men. To make a good X-Men comic, you don’t have to have epic battles or massively damaging superpowers. It’s the little issues like this that show the mutant struggle to belong. Doesn’t that mirror how everyone feels in real life?

I love this direction Marvel is taking in all the X-Men comics – introducing new, young mutants who are so “grotesque” that they probably couldn’t make it out in the world without the shelter of the school. I love seeing one of my favorite mutants, Nightcrawler taking these kids under his wing.

I could have spent my time reviewing something that was part of a deeper storyline, but I felt very strongly about this issue. It make me remember why I love comics and the nerd community in the first place!

One thought on “Amazing X-Men #13 Review”