This Saturday, I attended my local comic-con, Tri-State Comic Con in Huntington, WV. It’s a one-day comic convention in its third year and this was my first time attending. Huntington is the largest town in the Kentucky-Ohio-West Virginia tri-state area, where there is virtually nothing “nerd-friendly” to go out and do. Have you ever seen The Wonderful Whites of West Virginia? That’s a pretty good representation of the local scene, which was why I was so surprised at how awesome a comic convention could be in my hometown. First of all, the guests were so amazing. I couldn’t believe that Gail Simone and Daniel Way were coming to my hometown! They both did a panel at the con, but I’ll get into that later.

First off – my haul. I ended up going for a ton of wall art. I actually spent way more money at this convention than at Lexington Toy and Comic Con. 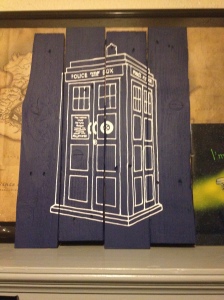 My favorite item – TARDIS by Playing With Pallets. Be sure to check them out on Facebook. They make all kinds of wall art and outdoor art with comic book and tv show themes and they do custom orders.

I bought my second print from Brett Pinson – Michonne – who is my favorite character from The Walking Dead. The first one I bought was Serenity from LexCon. I love this guy’s work and I’m going to make it a tradition to buy his artwork at every convention I go to.

I got three prints from Billy Tucci of Crusade Fine Arts. Poison Ivy, Harley Quinn, and Batgirl will be framed soon and hanging over my couch in the living room.

I only went to two of the panels this year – Gail Simone and Daniel Way. Gail Simone was the first panel of the day and I was so excited to see her! She talked about how she started out writing comics and ended up at DC writing Batgirl and Birds of Prey. She made a very good point – that writers should be able to write characters from all points of view. Female writers shouldn’t just be stuck writing female characters as well as male writers shouldn’t be stuck writing only male characters. I was sitting beside a six year old girl dressed up as Batgirl, and during the Q&A portion, she asked Gail Simone what she liked about writing Batgirl. It was the cutest thing ever!

The Daniel Way panel was very interesting – of course he wrote for Deadpool, Wolverine, Venom, and other Marvel characters. There were a little fewer people attending this panel, which was such a shame. Most of the people who were attending were little boys, and they were mostly asking him questions about Marvel history. There was this one guy who kept asking questions about Venom, saying how much he hate the comic and how many bad reviews he had written about it. That part was funny but also very awkward. I was sitting in the front row, so I was trying to keep a straight face the whole time.

I didn’t stay the whole day, so I missed the cosplay contest. I showed up to the convention at the earliest possible moment, and couldn’t stay the whole time because I had to get home to my puppies. I was actually thinking of cosplaying Poison Ivy, but I chickened out at the last minute. I like to get a feel for conventions first before I feel comfortable cosplaying at them. Anyway, at the times that I was there, I didn’t see very many really great cosplayers, but I did see some good costumes on my way out. Next year, I really will cosplay (I swear!!) and I will plan to go later in the day, so I don’t feel uncomfortable walking around in costume for hours at a time.

Will I Go Again?

Absolutely, I would go to this convention again and it has restored my faith in my local area having events that don’t revolve monster trucks and mud. I also have a renewed interest in making sure I go to all of my regional conventions. In August, I am very excited about going to Fandom Fest, which is in Louisville, KY and in October there is Tsubasacon in Huntington. If you live in the Appalachian area, I would definitely recommend traveling to Huntington for the weekend for Tri-Con 2015!