Fifteen people have been banished from their city and left to their own devices in Medieval times. Can you help them get back on their feet? Banished is a city builder/real time strategy on PC where you start with a randomly generated map and fifteen citizens who must survive harsh weather, natural disasters and disease. You assign citizens to specific jobs like farmer, woodcutter, builder, and hunter. The objective is to repopulate the map and have enough resources to keep your citizens alive.

Banished is about as open to interpretation as Minecraft. All of the things you can build are available right off the bat, all you need are the resources and the workers to build them. The game is incredibly challenging because you have to multitask. Not only do you have to keep your food supply up, but you also have to make sure you have enough firewood ready for the winter. Chopping logs into firewood is a separate job from cutting down trees, so you have to remember to tell your laborers to chop down wood. You also have to make sure your people have warm clothes to wear, so hunters gather leather while tailors make clothes. Then, you have to remember that all of these people need tools to work with, so make sure your laborers are gathering iron and wood so your blacksmith can make tools. It can be quite a mess at times.

The thing I like least about this game is that what you start out with is all you get. Because of that, the game gets monotonous after awhile. There are no objectives other than “don’t die.” You can’t really make upgrades. It’s not like Age of Empires where you can buy upgrades to help your citizens work more efficiently. It’s also not like Sim City where you can make advances in education and medicine. I realize this is a game set in Medieval times and isn’t meant to be advanced through time, but I would have at least liked to see the technology in the game advance through the period. 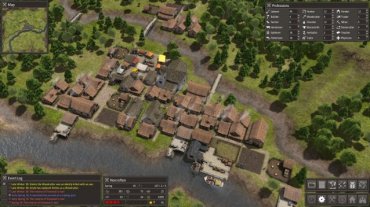 Even though there are no real objectives to Banished, at least you can use the achievements as guidance for how you want to progress in the game. Most of the achievements start at having a population of 300. After a couple hours of play, my town was only up to 100 citizens. The more you play the game, the better you get at managing your town. You also get faster at expanding your population. I think this is the type of game that gets better with more practice. The last city I built, which I named South Park, was growing fast and had more than enough workers. I had tons of food and I kept up a steady amount of firewood. However, earlier in the game I had turned off tool production since I had reached a good amount, and told that worker to go do something else. There isn’t any alert about being low on tools like there is for pretty much every other resource in the game, so I had forgotten to send my blacksmith back to work. Now none of my citizens can do their jobs and the blacksmith can’t keep up with demand. That’s an example of how once you think you’ve mastered Banished, you’ll eventually make a mistake.

Here are some tips where I’ve learned from my mistakes:

With all its frustrations, I would give Banished 8 out of 10. Even though there are no clear cut objectives, it’s very rewarding when you’ve learned something new on your own and can implement it in a new town. As a huge fan of strategy games, I’ll be playing Banished for weeks to come.

One thought on “Banished (PC) Review”