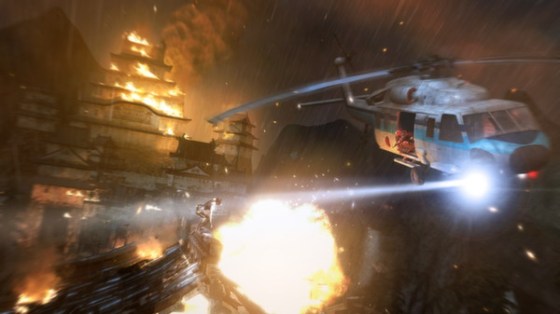 I had been dreading releases like this, where last gen games I already own get a shiny new re-release on the new consoles. However, with the announcement that 2013’s Tomb Raider was making a comeback for Xbox One and PlayStation 4, I was actually pretty excited. Not only have I purchased this on the Xbox 360 and PC, I also plan to purchase the game for Xbox One.

I love everything about the newest Tomb Raider. I like how Lara Croft isn’t just a total badass like before. She’s a real person put in really tough situations, and it shows. She gets emotional and you can tell she feels vulnerable. I had never felt any connection with Lara Croft until this latest game. The stuff she does is dirty, scary, and dangerous and I could sympathize with her. There are a lot of major blockbuster adventure games where you play total badass men and women who don’t flinch at anything, and that gets real boring for me real quick.

I’m not just interested in buying the Definitive Edition just because I liked the game. In that case, I would just play it on PC right now since I already own it. The first reason why is the graphics. Now, I’m a big graphics junkie to the point where I will buy a game I’m not really interested in just because the trailer has “pretty scenery.” When I first played Tomb Raider for Xbox 360, I thought the graphics were amazing and that the game was beautiful. Now that I’ve seen the trailer for Tomb Raider: Definitive Edition, the graphics are even that much more mind blowing.

So, I don’t really just drop an easy $60 for graphics alone, but apparently “Definitive Edition” is also codeword for Game of The Year, so we get a year’s worth of DLC with this game too. GOTY editions are another thing I am a sucker for. You get Tomb of the Lost Adventurer, six outfits, a digital mini art book, and a digital comic. Amazon is also selling an “Art Book Packaging” edition for no extra cost, where obviously you get a book of concept art. I would imagine that this edition is going to be pretty limited, but you can preorder it through Amazon.

Interestingly enough, the game releases in the US on January 28, which is the day after my birthday, if you were looking for a gift for me. Europe gets the game a few days later. If we’re just going to be getting a bunch of re-releases of last gen games with “current gen graphics,” then I hope they are released like the Tomb Raider: Definitive Edition. Even though it’s $60, you get updated graphics, all the DLC, and if you preorder you get an art book. I almost can’t wait for the next re-release!