Sometimes I feel like I’m in this minority of people who actually enjoy SimCity. I bought it the first week it was released and couldn’t even get in a server until three days later. I don’t know what it is, but there’s something about economic games that I rock at. So, imagine my total surprise when this little gem flew under the radar – DLC for SimCity releasing on November 12!

In this DLC, you can create a futuristic city. You can build sky-high buildings called MegaTowers a level at a time and each story can be a different zone. Sims can shop, work, and live all in the same MegaTower. You can also build parks and schools into them, too. You can plan them by wealth and connect them together by sky bridges, nearly eliminating ground traffic. The DLC will give you two new city specializations – Green Utopia and Corporate Consumerism. Green Utopia focuses on clean technology and high wealth citizens, while Corporate Consumerism focuses on exploiting resources and hiring low wage workers.

Omega is the new resource in this game. It is a futuristic high tech element used for all your technology and research. You can also sell it straight up to make the big bucks for your city. You also get service drones that hover over the streets, making all the deliveries for your industry to commerical zones to consumers, eliminating annoying delivery trucks that cause traffic jams. Actually, the drones can act as your police, fire department, and medics as well. Another upgrade to your transportation system is the MagLev. It’s a train that you build high above your roads, also eliminating traffic. Because of all this futuristic technology, Giant Robot Attacks are being added as a new natural disaster.

If you pre-order the DLC through Origin, you get the Launch Arcology. It’s a tourist transport to space, so hopefully your Sims will build space colonies? Also, as an Origin exclusive, you get the SkyClops Coaster. It’s a tourist attraction that adds a rollercoaster on top of your MegaTowers. 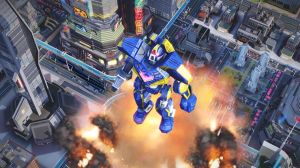 If you already have SimCity and have plenty of money to throw around, then get it. SimCity is not a perfect game by far, but I have thrown away a minimum of eight hours at a time playing this game. Sure, we all hate the multiplayer and wish there was an offline mode. Sure, the cities are too small, there’s too much wasted space between the cities in the regions, and there’s not enough freedom to design the cities the way you want. This new DLC does look exciting, but for $30, I’m going to have to skip it for now and hope that someday Origin has it on sale. I just feel too burned by EA to give this game another go.