Let’s be honest, I’ve had a rough week. If you’ve been following me on Twitter, you may have noticed I’ve had emergency dental procedures nearly every day this week. I’ve been in the most severe pain in my life, and I’ve missed 36 hours of work. I started feeling better yesterday, which strangely coincided with the release date of Pokemon X and Y.

I hadn’t planned on buying Pokemon this year, but I had been through a lot this week and definitely needed a pick me up. After watching a few videos on YouTube about the new Pokemon game, I got a little excited. I hadn’t even played Pokemon since Heart/Gold, but the new features of X/Y were interesting to me. After a lot of research into whether I should buy X or Y, I settled on Y based on this article on Kotaku.

It truly was the purchase I needed to make me feel like myself again. I bought it from the Nintendo eShop, took a little nap, then it was ready to play. I picked Chespin (Grass) as my starter Pokemon, mostly because I enjoyed starting Heart/Gold with Chikorita. It was pleasantly surprising not to start out the game with Professor Oak, but with a gang of newbie trainers instead who show you the ropes and give you your first Pokemon. Another fun surprise was being able catch Pikachu right at the beginning of the game. 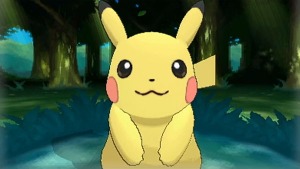 I really don’t know how Pokemon Black/White was, but there were some huge changes I noticed in Pokemon Y. First of all on your touch screen, you can choose between three different layouts. The first layout has to do with finding friends, multiplayer, and streetpass. The second is called Pokemon-Amie. The best way to describe it is Nintendogs for your Pokemon. I’m guessing it’s supposed to be the inside of a Pokeball. You can decorate it, pet your Pokemon, feed it treats, and play mini-games with it to keep it happy. The third screen is a training system where you can play mini-games with your Pokemon that raise stats. The first increase you get to work on is defense.

So far, my top three Pokemon are Chespin, Pikachi, and Pansear. I haven’t gotten my first gym badge yet because I’m not finished collecting all the Pokemon I can get from that area. In order to get your first gym badge, your Pokemon should be at least level 10. My top three are around 14 and the others are around 9, so I should be good to go. I’m ready to move on from the first town so I can finally meet Professor Oak, who should at some point offer me Bulbasaur, Charmander, or Squirtle. I will pick Charmander forver!

Here’s the YouTube video by MelonieMac that convinced me to buy Pokemon X/Y.

2 thoughts on “I Want To Be The Best There Ever Was- Pokemon X/Y Just Released!”