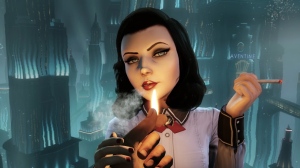 Irrational Games recently released a video showing the first five minutes of Burial at Sea, the next expansion for Bioshock Infinite. I have to say, Elizabeth, I missed you.

I first played Bioshock Infinite when it first came out, back before I started blogging. This game is probably my most favorite of any game I have ever played. Or maybe it had more of an effect on me emotionally than any game I ever played.

After watching this video, I can see that it’s taking  place in Rapture, back before it fell. Booker is maybe some sort of detective and the whole story begins like a 1940’s Film Noir. Elizabeth is much more mature and even sassy. She asks Booker to find a missing girl. Who knows where the story goes from there.

I’ve heard this DLC will be released sometime in early 2014. I personally can’t wait. I’m going to request a week’s vacation when an official release date is announced.

One thought on “5 Minutes in Rapture? Official Burial at Sea Gameplay”