If you read my last post about Fangasm, you know that it airs every Tuesday night on SyFy and that it’s a short docu-series where seven twenty-something “nerds” live in a house together and compete for an internship at Stan Lee’s Comikazee. It says a lot about the state of our economy right now that we are entertained by watching people compete for jobs that don’t even pay.

Anyway, this episode was a little more Jersey than the last one. At the beginning of each episode, I’ve noticed that they work first, play later. So, at the office, the contestants are asked to make short videos that will be uploaded to YouTube and promote Stan Lee’s Comikazee convention.

Later on, it seems like hormones start flying. The single people in the house start pairing up in stark contrast to how couples might progress on a show like Jersey Shore. One guy draws a picture of the girl he likes, leaves it in her room, and then denies ever drawing it in the first place. By the end of the episode, they still really aren’t in any relationship beyond the friend zone. 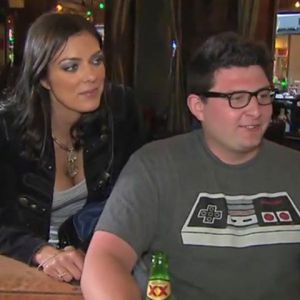 Adrienne Curry was the guest star of this episode and appeared on the housemates’ weekly podcast, talking about things like cosplay with consent and how to avoid the friend zone. Adrienne was the first person to win America’s Next Top Model, was a judge on The Tester, and is a frequent cosplayer. She took a couple of the guys to a bar and coached them on how to pick up women. One guy seemed to get it by the end of the day, while the other guy just ended up being an oblivious cock block. 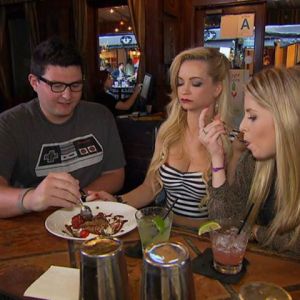 This episode was not really as good as the first one, if you want to call the first episode “good.” The best part about episode two was Adrienne Curry. I loved watching her on ANTM and I really love her sense of humor and her attitude and I’m really glad she’s broken into the nerd universe. I would give this episode a C-. Episode 3 will be on tonight, so lets see how it goes. The only thing that’s going to save this series for me is if Stan Lee would ever show up!